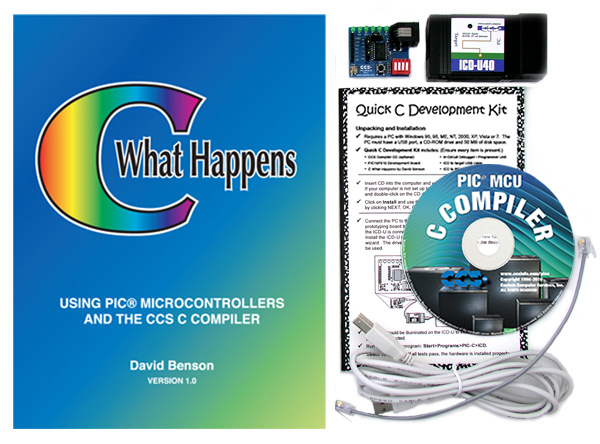 This is an ideal kit for those just getting started with C programming on a PIC® MCU and includes everything necessary to to step through example programs covered in the new book C What Happens by David Benson.

The tutorial, software and hardware provide a complete C learning system with powerful and easy-to-use features on the PIC16F818.

Option 2: Development Kit for Book Owners
Hardware and Software Only - $115


Why Use C Language?

"C doesn't put constraints in your way, it doesn't force you into using a particular programming style...in terms of getting something done with not too much effort, I haven't seen anything to this day that I like better." (Brian Kernighan, Author: The C Programming Language)

"Leading engineers worldwide continue to use the PIC® microcontroller architecture because we provide a competitive advantage to their businesses with faster time to market, lower total system cost and low-risk product development." (Steve Sanghi, President and CEO, Microchip Technology, Inc.) 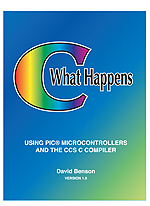 The reader will learn to create programs by making selections from a large variety of built-in functions provided in the CCS C Compiler, writing his/her own functions as needed, and writing executable statements. The reader will "C what happens" by programming a PIC® microcontroller with the newly created code and exercising it using a simple circuit described in the book.

The subject matter is laid out in a logical progression from simple to not-so-simple and is illustrated with lots of examples.