The CCS optimizing C compiler, ICD-U64 programmer/debugger and CCSLoad programmer control software have been upgraded to support the streaming of serial data through the Microchip PIC® MCU ICSP™ interface. Repurposing the programming interface as a serial port reduces cost during product development, production and after deployment in the field. No cost increase to PCB by using Tag-Connect PADS on the PCB.

When prototyping, developers can use the interface to gain valuable insight into program operation, almost in real-time. While software debuggers can be used with the ICSP™ interface, use often requires that the processor be halted to allow for examination and modification of variable values. This new streaming approach allows diagnostic and performance data to be output and charted without stopping execution, of particular importance when debugging multiprocessor systems.

Simplify Board Testing and Personalization in Production

During production, line personnel can display and set calibration data from a PC terminal, enter serial numbers and run special production tests. This is especially useful when the end product does not include I/O devices that could be used for these functions. 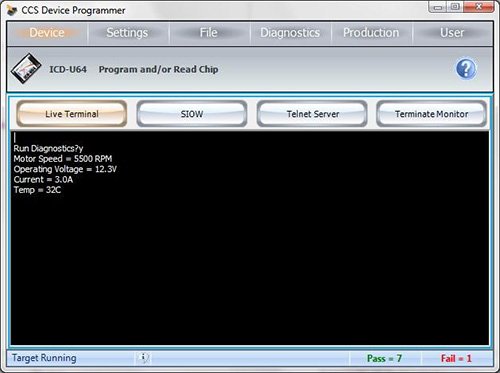 After the product is deployed, field engineers can access fault logs, monitor and diagnose problems. Operating parameters can be updated without having to reload an entirely new software image.

A new CCS C compiler built-in function allows developers to use familiar "printf" and "getc" statements to stream data to a PC through the ICSP™ interface:

The ICD-U64 serves as the physical interface, bridging the target's programming pins to the host PC's USB port. Users can access the data through CCSLoad or alternatively, a Window's terminal emulation program, DOS command line interface or the SIOW data graphing interface included in the CCC IDE Compilers. Remote internet access to the target is provided via Telnet.